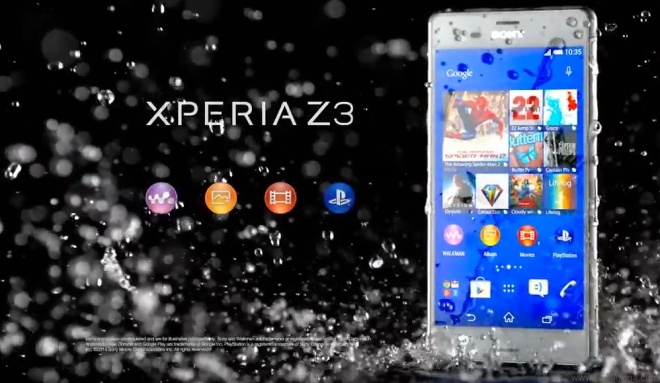 Sony’s Xperia Z3 (along with its Xperia Z3v) is their latest attempt at breaking into the mainstream US smartphone market. They make a lot of promises with the device, but does it really live up to its 2-Day battery, 20.7 MP camera, immersive front-facing speakers, and fun gaming sessions with Playstation 4 Remote Play? Let’s find out.

Quite possibly the biggest claim of their Z3 flagship is the 2-Day battery life. Unfortunately for the time had with this device, it quite simply is not the case. Being quite blunt, this battery does not even last 1-Day for a power user. Besides Display killing battery as per norm on most devices, on the Z3 there is something that has to be wrong with Bluetooth. More explained later about that; Android Wear is heavily draining the battery on the Z3 and eating up CPU cycles for seemingly no reason at all. In this case a Moto 360 is connected and is also being used for trusted Bluetooth device unlock, a feature that hopefully isn’t causing this issue for how convenient it is to not have to enter a passcode or PIN lock when you’re Bluetooth device is nearby. For example, just this morning by 11AM the Z3 had 28% of its battery life taken from Android Wear. Resetting the Moto 360 and re-installing the Android Wear app seems to not do anything to alleviate the problem. It’s evident from other users on XDA-Developers.com that not everyone is having the same problems with their Z3, so to each their own.

Megapixels aren’t everything when it comes to a smartphone camera. Although, with the Xperia Z3 that is definitely the case! Sony has decided to go with an Auto camera mode that takes a few 20.7 MP images and down-samples them into a 8 MP image. In theory this is a good thing, it makes better wide-screen ratio’d images and saves memory on the device, but what if you have a large microSD slot and want to take full advantage of the 20.7 MP shooter? This camera doesn’t disappoint and it probably the strongest feature of the Z3 (when you use Manual mode to set the higher resolution!). Pictures are worth a thousand words of course, so below are some samples of some festive scenes and the San Diego Zoo Safari park that were taken with the Manual setting. As well, you will find a 4K Tiger and a 720p Time-Shift video of a waterfall.

Normally, headphones are included with modern day smartphones, but not in the T-Mobile variant of the Sony Xperia Z3. So for better or for worse, the dual-front facing speakers were used for this review. Music videos that take advantage of stereo in quiet environment sound great. However, the speaker settings are not calibrated at all. 0-80% is near silent, 90% is OK in quiet places… and 100% is extremely loud. Not just extremely loud though, but it sounds horribly blown out and distorted at 100%. The same goes for in-call quality! A choice must be made between loud and tingy or too low of a volume for normal humans to hear. Most of the phone calls were over HD Voice, but as soon as it went to standard voice quality it makes the user strain to understand anyone on the phone call. Its a darn shame that some smartphone manufacturers ignore the phone part and just focus on the smart.

Disappointment is an understatement, Remote Play can be described by one word unplayable. Sony’s Hero feature for this device was its compatibility with PS4 Remote Play. For their credit, they did turn it on before their original November date it was slated to be released, but its downhill from there. A bit about the test environment: A Playstation 4 hard-wired by ethernet connection to an AC router, a Z3 connected via said AC router, a DualShock 4 controller connected video Bluetooth, and a frustrated Destiny gamer. When using the Remote Play app’s on-screen control buttons there is little to no noticeable input lag… that is NOT the case when using the DualShock 4 gamepad from Sony. 1 second of input lag with a gamepad makes Destiny a horrible experience and anyone playing in such an environment would be quickly overrun by enemy Fallen, Hive, Vex, and Guardians in the Crucible alike. On top of the terrible input lag, the Z3’s WiFi range is also just plain terrible. Even 10 feet from the AC router there were disconnects from the Playstation 4. In comparison, this same environment and router was used for an Nvidia SHIELD streaming which is also 720p@60FPS and there was no input lag or disconnect issues. Sony needs to step up their game when it comes to Remote Play and its unacceptable to advertise it as the Xperia Z3’s saving grace.

Every OEM like to put their own skin on Android, Motorola absent, and Sony is no different. However, their skin is mostly just a UI change and everything runs silky smooth. There is one major thing that Sony should really advertise some more and that is Xperia Themes. Any user can go into the Play Store and download themes that can change a ton of the look and feel of the device, no root and sometimes no cost needed! A great example is the Android L theme that can be purchased for the pro version here or given a test run with the free version here. It changes the soft-keys along the bottom to look just like Android Lollipop’s shapes and when combined with the Google Now Launcher, 8SMS, and the Google Keyboard give a very smooth and stock Android-like experience without having to root or unlock any bootloaders. Speaking of rooting and bootloaders, you won’t be doing anything on the T-Mobile version of the Z3 or the Z3v as of the time of this review. The current version of Android on both is 4.4.4 Kitkat, and Sony claims to be updating the Z3 to Lollipop in late first quarter 2015. Compare this to Samsung’s claim of December and you’ll see that’s a very slow update turnaround if even the masters of UI overhauls and bloat can get it done by the new year!

Sony, like Motorola with the Moto X 2014, thankfully did not fall for the trap of 1440p smartphone displays. The Z3 has a 5.2″ @ 1080p screen that brings a dpi of 423 (keep in mind, Apple considers Retina on a smartphone 300 dpi and above, and they aren’t wrong!). Anything past 400 dpi is honestly not worth the horsepower required to keep up with it. For example, the DROID Turbo with the Snapdragon 805 @ 1440p could last even longer and run even faster with 1080p. Instead of going with the same 423 dpi if they had a 1080p display like the Z3, they went for a dpi of 564. Its quite wasteful and I hope this doesn’t become the norm from now on. As for the quality of the screen, coming from the Samsung Galaxy S 5’s Super AMOLED display, the Xperia Z3’s IPS LCD screen is bland and the white’s appear quite grey.

With a 5.2″ screen and large bezels on the top and bottom, the Z3 is almost impossible to use one handed. Thankfully, Sony decided to put the power, volume, and dedicated camera key on the middle of the right-side of the phone so its not difficult to reach them. Also, a fun feature they don’t really advertise is Double-Tap to turn on the display, a feature borrowed from LG and stock Android L, but definitely a welcome one! User beware! The back of the Xperia Z3 is made of a glass material and is quite slippery. Get a case for this one or be at risk of it slipping out of the hands when trying to snap a pic or when taking out of a pocket. The material looks nice, but its definitely not worth the risk of cracking one of the two pieces of glass the phone is made out of. Water resistance is a requirement these days, and its no surprise that the Xperia Z3 is advertised heavily as such. There was no water resistance test done for this review, but that’s mainly since this is a personal pre-order device and not a review unit.

Should a consumer looking for a smartphone in November 2014 purchase a Sony Xperia Z3? I’ll leave that choice up to the user. The review experience turned from positive initially into a fairly negative one, and this phone will be turned ASAP and be replaced soon by a Nexus 6.