Well, Android Q has officially been named.  At least, the next version of Android has been named.  In a shocking turn of events Google has decided to move away from its tradition of naming the OS after desserts.  Instead of any Q-esque dessert, Android 10 has been announced.  After 10 years of dessert names, it’s all numbers from here on.

With Android 10 as the next version, things will simply increment up from here (11 and so on).  I guess it had to come to an end eventually, but I think it’s safe to say most of us expected this to happen closer to Z than Q. The world needs more desserts! 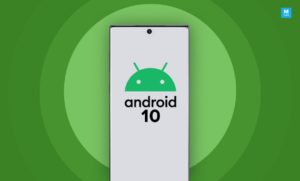 As for whythe naming pattern changed, it’s not just because Q is a hard letter to match with a dessert.  Google’s VP of product management for Android said that it’s because desserts aren’t inclusive enough.  “We have some good names, but in each and every case they leave a part of the world out.”

Android is a global brand, and as such they don’t want to pick desserts that are regional and other people can’t relate to.  At least that’s what they say…I still think no one could come up with the right thing for Q!

While the naming convention has changed, don’t worry!  The classic Android robot still exists.  He received an updated logo but it’s nothing too drastic. A few small tweaks for him and some larger changes for the Android word itself.  Now in all black, the logo is supposed to be more readable on small devices.  Changing it to a sleek black will help with that issue.

And of course it wouldn’t be any fun if the images were just introduced and then that was it.  Here’s a fun little video released by Android showing off the new look. The video emphasizes heavily that we’ve been growing together as a community, and that shouldn’t stop anytime soon.  While it’s a little cheesy, I have to agree with the sentiment.  There is a sort of bond between Android users and especially as a developer it’s been really fun to watch it change over the years.  Here’s hoping Android 10 continues that trend!

What are your thoughts on the new naming convention?  How about the logo?  Let us know in the comments below.

1 thought on “Android Quits on Q”