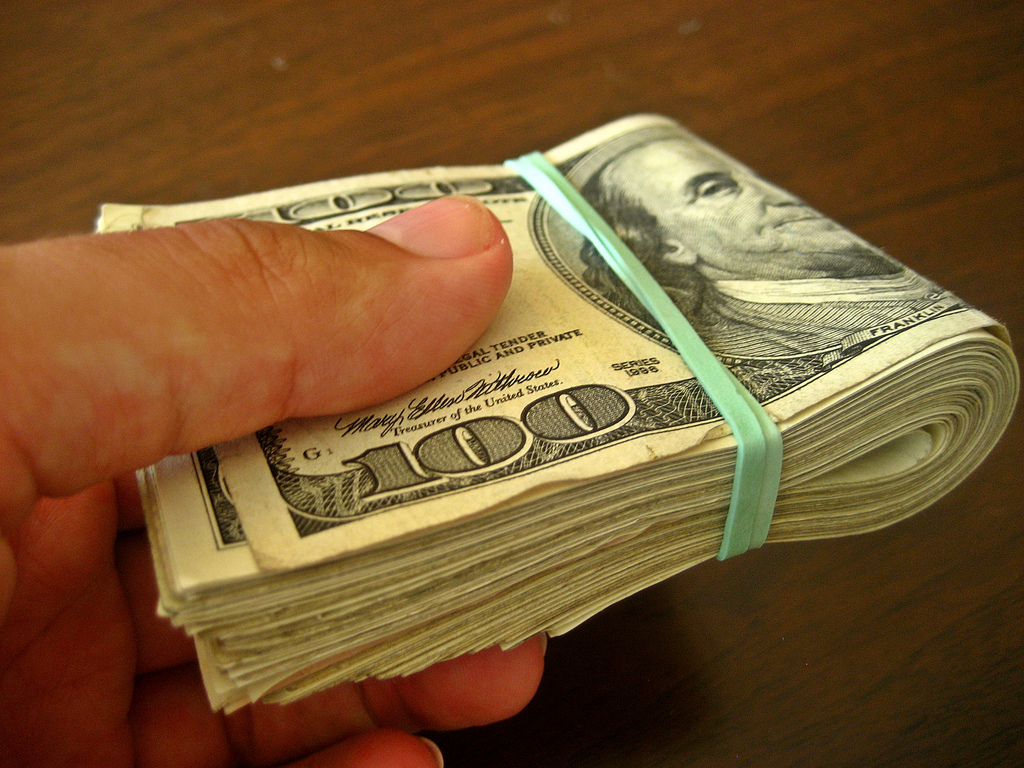 Google and Apple hate Italians, Samsung hates the British but One Plus likes everyone.

First the back story

For those that don’t know me, I started writing for the RootJunky website about a month ago. My last post was a review of the Nexus 6P, it’s a great device by the way. Check out the review here. I ended that post with:

“Well it (Nexus 6P) may be the best value for your dollar unless you are Italian. Why am I picking on the Italians? Well I’m not, but come back to view my next post and find out who is”

So who is picking on the Italians? Well it looks like Google and Apples are teaming up against the country that brought pizza to the world.

Ok there are a few things that I should say right off the bat. I am not an economist or an accountant. I am not even a professional journalist. I am just a guy that likes tech and has opinions to share. This week I would like to share some interesting thing that I found when reviewing the price for the Nexus 6P.

I live in Canada and my good friend Tom the RootJunky lives in the USofA. It is standard knowledge that technology items are cheaper south of the border but after you work out the exchange it is usually a wash. A few bucks here or there, no big deal. While writing my review I had watched an angry Damir Franc rant about the price of the Nexus in German. I decided to investigate further.

I started my investigation by picking a few countries spread throughout our little planet. I looked at the rate of exchange; this was in early november, and compared prices. Have a look at what i found out below. 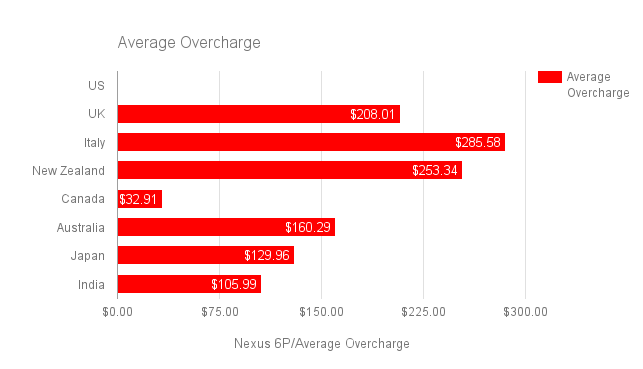 If you compare the prices for the 32gb, 64gb, and 128gb models, Italians are paying an average of $285.58 extra for their phones. That sucks! Small wonder why Damir was so upset. He lives in Germany not Italy, but i am sure that most countries that use the Euro are very close in price. Things are not much better in New Zealand or the United Kingdom. My fellow Canadians are doing ok but the pacific side of the world, not so much. Australia is overcharged by $160, Japan by $130 and India by about a hundred dollars. Why? I have not clue. Honestly i don’t know why this happens. I decided to investigate a little further.

I thought to myself that this may be a Google thing? Perhaps Apple does it differently? Nope have a look at there numbers below. 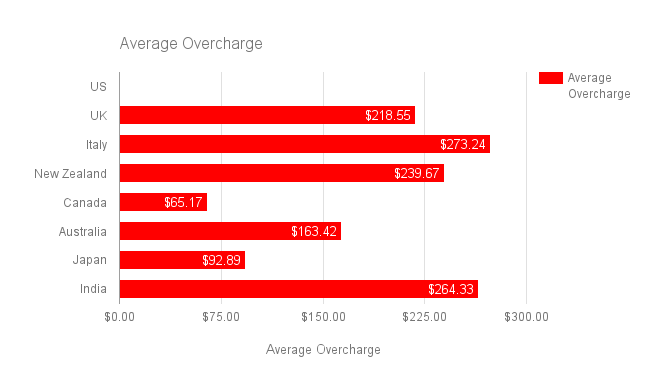 The iphone 6s had nearly identical overcharges when compared to the 6p. Uk, Italy, Australia and New Zealand were within $15 dollars of the Nexus overcharge amount. Again, my hockey playing brethren had the best deal at $65 overcharge but those iphones are so damned expensive already. Japan did ok but India got treated like an Italian stepson by accounting department at Apple. Again I am asking why? Perhaps both companies have some long standing vendetta against spaghetti and are now planning to make the entire country suffer?

Did samsung come out any better? Not really. Their chart and numbers are below. Samsung was a little nicer to the Italians and India but they seem to dislike the people that brought us Dr. Who. Your average Brit is paying over $200 more than an american for the same phone. The south Korean company seems to like Canadians, as we are pay about $3 less than anyone else. As a Canadian all I can say is “sorry about that, eh.” 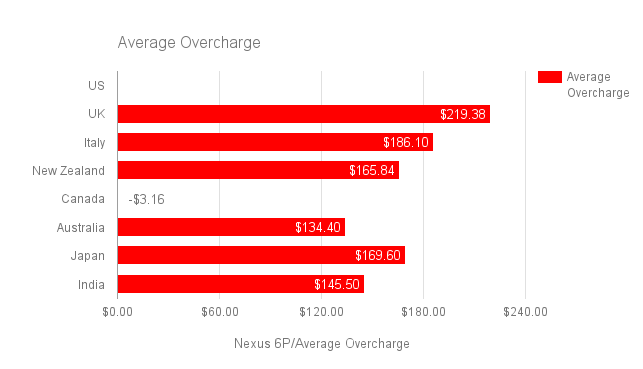 Throughout this entire time I was researching prices, the question of why kept on coming around and I had not found a solid answer. While looking for that answer I did question my methods. I was using a dollar conversion rate from a random day in November, the prices I used for the phones were just pulled off of websites that were easily translated. My Japanese and Hindi are a little rusty so perhaps I could have found better prices had I been able to do some comparison shopping. Even with all my possible errors in approaching there is a pattern. Pricing is not even across the globe. There has to be a reason.

After looking at these three phones I started to think that this must be some kind of tariff effect. The taxes in these countries are set up to penalize technology. Not being an economist, I don’t understand the full workings of trade tariffs and taxes but we have all read about them from time to time and know that they exist and their basic workings. This was a pill I could swallow. It was not a perfect answer but the UK and European Union seem to pay higher rates for phones while Canadia seems to remain on par with the US. This pattern seemed repeatable. This seemed to make sense until i looked at OnePlus. Check out their numbers below. 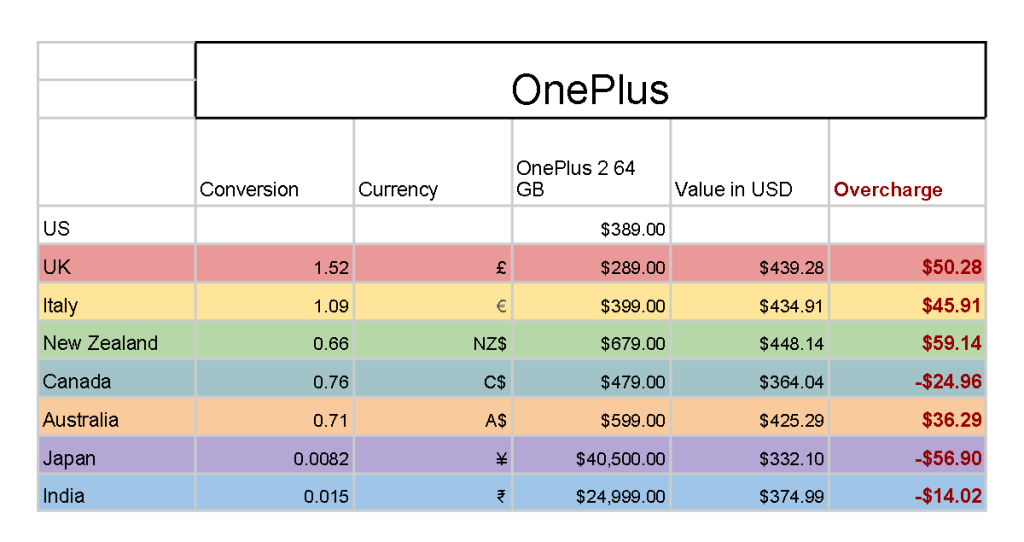 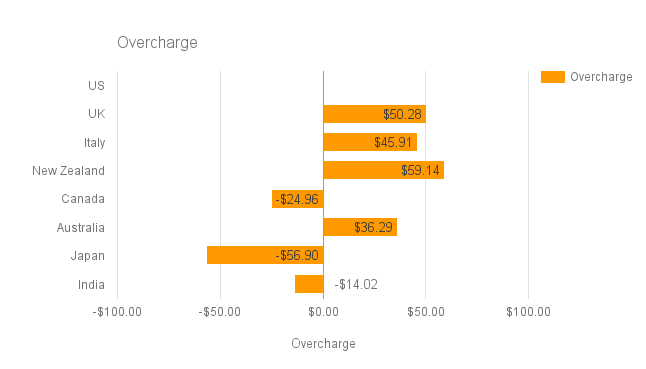 OnePlus can somehow manage to be “fair” to everyone’s wallet, never mind what kind of bills you put into it. Looking at this kind of blows that tariff/tax idea out of the water. If OnePlus can keep their phones to within $107, why can’t everyone else? With OnePlus there are even some countries that are paying less than the United States. Canada, Japan and India pay less for the OnePlus 2 after conversation to US OnePlus .

I would like to know what others think but here is my two sense. Samsung, Google and Apple charge more because…… well I think it is because they can.  I don’t really think that any company would have it our for one country or another.  That is not how the world works, but the world does run on money.  OnePlus is a new company that is trying gain a reputation for giving its customers the best bang for your buck. You can’t do that and ask Italians to pay $280 more, all at the same time. OnePlus wants and needs the sale and that is reflected in the price. These other three phones are vying for premium spots in the market. They want you to associate them as top end. One way to do that is increase the price. If it is expensive lots of people will assume that it has value. That is my best guess.

What do you think? I would like to hear your thoughts on this, especial if you are from any of the listed countries.  Have you been able to find better deal?  Area you leaning toward other OEMs like OnePlus because they are giving you a fair deal?  I would be interested in hearing what you think.