Hands Up For Hands Off Hardware

Have you ever held your phone for so long that your hand start to cramp up?  Maybe I just have a problem and need to get off mine.  Regardless I’m sure I’m not alone in wishing that I could navigate at times without having to actually touch my screen.  Thanks to Google’s new app Voice Access this is becoming a reality.

Plenty of people could benefit from using their devices while their busy doing other things.  Whether it’s cooking a meal or driving a car it’s nice to at least have the option.  Google’s Central Accessibility Team agrees with this and after years of research has release an app that lets users move to and fro in apps using just their voices.  We’ve had things like Google Assistant around for a while now, but this is taking things up a notch.

Voice Access has actually been in beta for a couple years, but non-stop development has finally made it ready for a production release.  Users are able to open and close apps, compose text messages, click buttons, watch videos (ok that one doesn’t really take touch in the first place).  Long story short there aren’t a lot of interactions that you can’t replicate using your voice.

So How Does It Work? 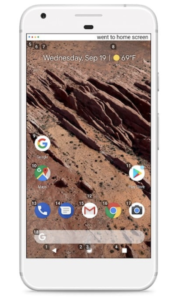 Voice Access offers users control of where they want to go by placing numbers on the screen near possible interactions.  Users can say what they want to click on and also issue commands such as “turn down the volume”, “turn off device”, or “scroll up”.    In other words, there are common sense interactions, and for everything else there are little paper clips floating around and if you say their name they’ll help you out.

Users can even modify their texts as they type them.  For instance if you wrote a text to a friend saying “Do you want to get dinner tonight?” but then changed your mind you could ask Voice Access to modify.  Simply say “replace ‘tonight’ with ‘tomorrow”, and the text would become “Do you want to get dinner tomorrow?” This kind of feature is particularly useful when you consider that the majority of people using hands free devices for interactions will be texting.

But it isn’t just for convenience’s sake.  In the United States alone millions of people have mobility impairments that could limit their hand function.  Voice Access offers people a chance to use phones to their full capacity when that capability might not otherwise have existed.  It will also be interesting to see how this develops as Fuchsia rises in popularity.  That alternative operating system is based around audio interactions so the two could certainly have some innovation in the years to come.

What do you think about hands free devices?  Have you thought of any other ways users could use their phones other than with voice commands?  Let us know in the comments below!