The Pixel 3 has been unveiled, and it looks sweet!

We’ve talked about the Pixel 3 again and again here at RootJunky, and there have been far too many rumors and leaks about it over the past few months.  I’m happy to say that’s all come to a close.  Not because I don’t like writing about it, but because the Pixel 3 has officially been released. Earlier today Google unveiled the new phone, and the preorders have begun rolling in.

Before we get in to what the Pixel 3 and 3XL actually are, let’s take a second to remember how much build up there was about these devices.  There were images leaked on the XDADeveloper forum showing a notched display with two cameras, as well as a glass back for wireless charging.  But hardware leaks aside, what was really interesting about this phone’s build up was the rumors about rumors.

After we’d all sat with the leaked images for a bit the news surfaces that Google was reaching out to popular YouTuber’s asking to use their clips bashing the leaked design.  The result of this was the people began thinking Google had intentionally leaked images so that they could use this footage in their grand reveal of a more impressive phone.  It was a conspiracy theory for sure, but not entirely unbelievable. 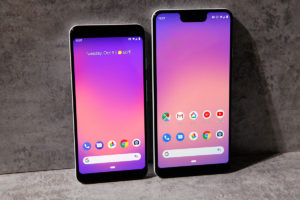 Skipping to today the Pixel actually dropped, and it actually doesn’t look that different from the leaked images.  Despite what some YouTuber’s may have said I don’t think that’s a bad thing.  Starting at $799, the Pixel 3 sticks to the traditional design of a split material back allowing for wireless charging (thank goodness!).  The regular phone measures in at 5.5 inches and for $100 more the XL measures in at 6.3 inches.

Pixel phones have been notorious for having great cameras, and that trend isn’t stopping with the Pixel 3. It is however deciding to avoid the current trend of a dual rear camera.  With a total of 3 cameras, one can be found on the back and two on the front.  And guess what?  For the XL these cameras are nested in a notch.  This trend seems to be sticking around for a while, and even Google’s flagship device has embraced it.  The new cameras seek to take the crown and offer incredible zoom in as well as a wide range selfie mode.

Remember that ground breaking release from Google I/O earlier this year called Duplex?  It seemed unreal as the Google Assistant called a barber shop, had a conversation with the receptionist, and successfully booked an appointment for its user.
Well the Pixel 3 leverages this technology to make your call screening much more enjoyable.  Using Duplex, you’ll never have to answer the phone for a telemarketer again. 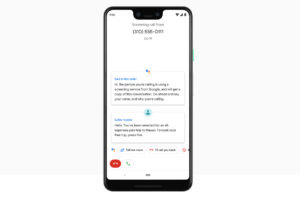 The Pixel 3 can answer itself and provide a real-time transcript to you of whatever the caller says. Duplex prompts them on the other side of the line asking them to identify themselves and let you know if the call is urgent, and as they talk you can see the text appear on your screen.
Then if you want to answer you can, or you can select from premade responses to keep the conversation going and get more details before deciding to pick up or not.  Google Assistant really is becoming a personal secretary.

I’m really excited for the Pixel 3 to be out and will be getting my hands on it as soon as I can. What are your thoughts on the new device?  Let us know in the comments below!